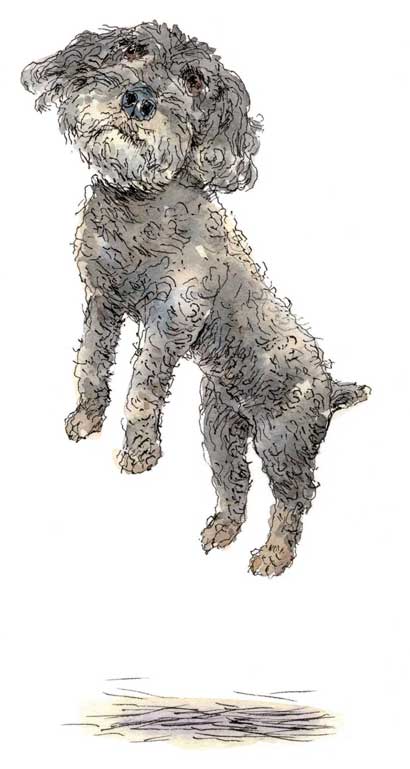 One Spunky Schnoodle: A mother and a daughter form an unexpected bond over a spirited pup

When my dog walks these days, he shuffles stiffly because of the arthritis that forces him to take medication twice a day. He can’t hear out of his right ear, and his left isn’t much better after a series of ear infections and hematomas a couple of years ago. And while tales of Maverick’s jumping abilities are legendary in my family—my little twenty-pound schnoodle once snagged a piece of Easter ham off the middle of a four-foot-high counter—lately he can’t even jump on the couch. He’s started to fall down spread-eagle on our hardwood floors, unable to get up.

He’s about seventy-six in dog years—fifteen in human terms. Our time together is drawing to a close. Yet I still see a sassy spark in his eyes the 12 percent of the day he isn’t sleeping. He still bounds around our house and yard in spurts, grinning. He has more good days than bad.

But how can I be sure? How will I know when it’s time to say goodbye?

You see, I have never watched a pet grow old. I have never nursed a dog through achy bones and failing eyesight and senior ailments. I don’t know what it’s like to lose my best friend.

During my childhood, my family had three cats and two dogs—but not one for longer than a few months. Every time my mom relented to my and my older brother’s pleas for a furry friend, within a few weeks she would start to complain about sneezing and an itchy throat. Her allergies were too bad for the pets to stay, she’d say. Misty, Fluffy, Jenny, Tilly, Ziggy—they were all given away before we truly got to know them.

Everyone in my family knew my mom had hypochondriacal tendencies. We never really believed her symptoms were that bad—certainly not bad enough to prevent us from having a loyal childhood best buddy—and so my brother and I blamed her for our shattered dog dreams. Our mom felt guilty about all the false starts, and promised to help us each find our first dog when we moved into our own place.

I held her to that when Maverick came into my life in 2004. Every time my new schnoodle and I visited my parents, my mom delighted in watching my little puppy learn how to walk on a leash, come when called, and recognize the word cheese because she fed him so much of his favorite treat. She savored his playful mischievousness and basked in his unconditional love as much as I did.

As Maverick aged into double digits, though, she started worrying about how I would handle his looming departure. “Maybe you should get another dog,” she encouraged me more than once. “A backup.”

“Do you have a backup for Dad?” I retorted every time.

I knew she was trying to ease what she understood would be an unbearable difficulty for me no matter what. I didn’t want alternatives or distractions. I didn’t want to learn how to let go before I had to.

Maybe that’s why I didn’t know how to say goodbye to my mom, either.

By the time we learned my mom’s cancer had returned, she had already gone through two rounds of chemotherapy and—we thought—defeated the disease. Doctors had first spotted the deadly cells in 2009 in her uterus. She made it through surgery and three months of chemo, lost all her hair and much of her strength, but she beat it. Somehow, I never doubted she would.

She had been cancer-free for six years—a span in which she watched me fall in love, get married, and move five hundred miles away from my Michigan hometown to Charlotte, North Carolina, for my new husband’s job—when her blood tests began coming back with suspicious numbers. By fall 2016, the cancer had reappeared in her abdomen and she started chemo, again.

This was merely a road bump, I thought, something she would overcome. My mom had always been so strong and forceful, so demanding and stubborn. These can be trying qualities, at times, in a mother, but they’re ideal for facing a terminal illness. A friend once called her “a fighter,” and I had a remarkable moment of recognition when I heard that description. I simply couldn’t imagine her as frail. But after three months of chemo, after her hair fell out again and she developed blood clots and infections, her doctor told her, “The cancer is winning.”

How do you know when to let go? My mom kept fighting, so I kept believing it wasn’t time. She sought new doctors who offered new ideas but no promises. Complications then sent her to the hospital again days before Easter in 2018. Unable to stand from her bed, she pleaded with me, “Get your dad, he’ll know what to do,” and I realized this time was different. I rushed to the bathroom across the hall to sob.

Back in Charlotte the next week, I asked my dad for an update. “It’s a question of when, not if,” he texted.

How do you know when it’s time to say goodbye? I didn’t—I couldn’t—and it fills me with regret. There are so many things I wish I could have told my mom, all the things we never said in our family, about how I loved her and learned from her, how her passion for arts and creativity and her belief in me helped shape my life, how my husband spots her stubbornness in me and how it has been essential to my career as a journalist. How everything I’ve ever done was to make her proud.

Four days after my mom entered the hospital for the last time, a debilitating case of what’s known as old-dog vestibular disease—vertigo, for dogs—hit Maverick. When it strikes, the dog’s world spins, and without the ability to understand that this is an optical illusion, he becomes frightened and confused.

In Maverick’s case, the disease reared after we had to stop the car abruptly on the way back from visiting my family for Easter. He went flying in the backseat, and something in his inner ear jumbled. Suddenly, he couldn’t walk straight, and then he couldn’t stand at all. The emergency vet told us it could be vestibular disease—or a brain tumor. The only way to know was either to do an expensive MRI, or to give him time. Even if an MRI found something, invasive brain surgery would have been too much for our then fourteen-year-old dog, so we chose the latter.

Stuck at home with my senior schnoodle who couldn’t stand, while my mom was in a hospital in Michigan fighting for her life, I realized I might have to say goodbye to two of the most important beings in my life at once, and it wrecked me. I couldn’t eat; I couldn’t sleep. I cried nearly nonstop.

“Your mother wants to know how Maverick is doing,” my dad texted on her sixth day in the hospital and Maverick’s first day home from the animal hospital. “Keep us updated. Mav is part of the family.”

I wondered how my mom, on the strongest of painkillers and in her last days, could possibly think of me. All those times when we were children and she had, we thought, selfishly prevented us from having a dog—now she was at her most unselfish when I needed her the most.

I was in the airport on my way to see her when my brother called to tell me she had passed away. I never got to say goodbye. All this time later, though, I see that her last days were spent giving me one more gift: the lesson that the only way to let someone go is to do it with love. Show your love. Make it felt and understood. It really is that simple.

Maverick recovered over the course of a month, slowly standing, then walking, then playfully bounding as he always has. His head still tilts to the left, particularly when he’s tired, one lingering effect of the disease that sometimes makes him feel as if his world is unsteady. I care for him with extravagant affection. I whisper, “I love you” into his fur. I massage his joints when he snuggles next to me. I carry him down stairs and hand-feed him kibble one piece at a time.

Maybe it’s not so much about the words we say at the end. Maybe it’s the love we show in the little moments, the way we live our lives as a reflection of the people who raised us and taught us, nurtured us, and pushed us to become the best versions of ourselves. I hope Maverick sees that love now.

And I hope my mom saw it, too.