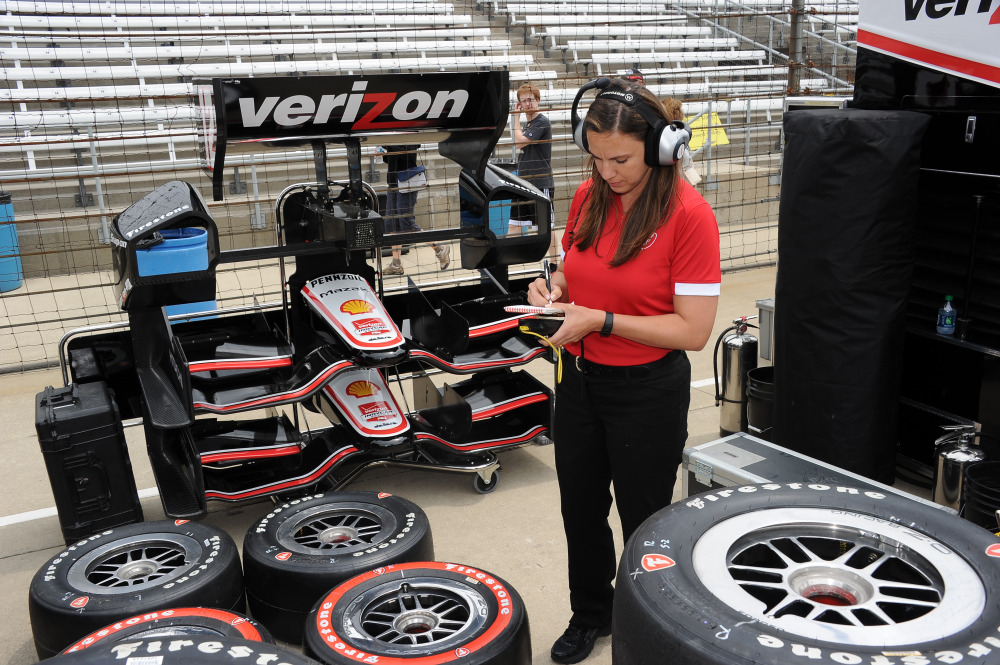 At one of Jessica Mace’s first jobs working on cars in the racing industry, her crew chief told her it probably would be a good idea if she changed professions. You know, because she’s a woman.

Kate Gundlach recognizes that whenever she’s out at the track doing her job as an assistant race engineer, all eyes are trained on her. “Everyone knows the one girl in the paddock,” she explained.

And just the other day, Anna Chatten was carrying a couple of heavy buckets at Indianapolis Motor Speedway, on her way to

“Hey, maybe you should get a man to do that for you!” the fan bellowed.

It might be 2015, but in the auto racing world, change still is coming slowly. Chances are, Indianapolis 500 fans have heard of Simona de Silvestro, Pippa Mann and Sarah Fisher. They’re the women breaking barriers by having driven the cars, the faces everyone recognizes in the Verizon IndyCar Series.

But Mace, Chatten and Gundlach join senior project engineer Cara Adams, the lead engineer who designed the Firestone tires used at the Speedway this weekend, as a few of the handful of women working behind the scenes during this year’s Indy 500. IndyCar doesn’t have firm numbers on how many women, precisely, will be working on cars with teams, but it’s estimated to be fewer than a half-dozen.

Mace, a mechanic on Conor Daly’s car is also an inside front tire changer — and will be the only woman to go over the wall on pit stops in this year’s race.

Chatten, the gear box mechanic, was the first woman to claim that honor in 2009 when working the air jack for Milka Duno’s car for Dreyer & Reinbold. Chatten since has altered her career course slightly with no current designs to go over the wall — because nine months ago she had a baby girl, and doesn’t feel at optimum fitness.

A year ago, Chatten was five months pregnant with baby Violet, and laughed at how she had no choice but to give up her over-the-wall pit crew duties.

“I would have given somebody in IndyCar a heart attack,” Chatten said, laughing. “The girl thing isn’t really receptive, let alone pregnant girls. That put a whole different spin on it.”

Women in the racing world are used to all the questions and looks of skepticism by the time they get to the top-level IndyCar series, which is why Chatten can laugh about the doubters, now. The common denominator among the two mechanics and two engineers is that all got into the sport because of their love for it — and despite the naysayers.

All had to work their way up from the bottom, proving themselves knowledgeable and capable in their respective fields.

Take Gundlach, for instance. She’s the assistant race engineer for Charlie Kimball, and also times fuel inflow during pit stops, determining how much distance the car can eek out on the gasoline. She grew up with parents who raced motorcycles, spent her youth at tracks and was working on cars by the time she was old enough to handle a wrench.

“Just being around machines felt easy, it felt like home,” Gundlach said. “That kind of stuff came easily to me, I guess is the way to say it. It felt like home.”

She studied mechanical engineering at the University of Pittsburgh, figuring having that knowledge would be her surest bet to latch onto a team. And though she felt prepared, she feels fortunate to have worked with another female engineer, Rossella Manfrinato, early in her career so that she had a role model and supporter.

Still, she knows there always is a little extra attention paid to everything she does.

“You’re right in the spotlight, everyone knows who you are, regardless of what you do,” Gundlach said. “There are always those questions: ‘What are you in this for? Do you like the attention? Do you want to actually be here because you love it? Are we fixing your mistakes?’ I feel like my mistakes are magnified just because it’s so easy to see me.”

That extra scrutiny is why a year ago, Mace began practicing changing tires on IndyCar-style cars three months ahead of the Indy 500. She wanted to make sure she was ready — and, in the back of her mind, prove wrong that crew chief from long ago who told her to find a different job because she was a woman.

“Now I just want to show you I belong here,” Mace remembers thinking. “If they’re going to be that way, it’ll make me stronger.”

Chatten now considers herself among the old guard in the racing world, having worked as a mechanic for teams for 16 years. The two most valuable lessons she’s learned? Work smarter not harder, and never listen to people outside the sport.

“I hate, hate, hate, hate asking for help,” Chatten said. “I learned really quickly to not ask for help. You just have to work smarter. There’s always a way to do it. You get a longer cheater bar or a ladder. (If you ask for help) that just gives them a reason or an out to not be there.”

As for the guy who told her to find a man to carry heavy things for her? Chatten can only shake her head at the ignorance.

“The funny thing is, I get more rude, snide comments from spectators and fans than I ever do from people who work alongside me,” she said. “They know how hard I work.”