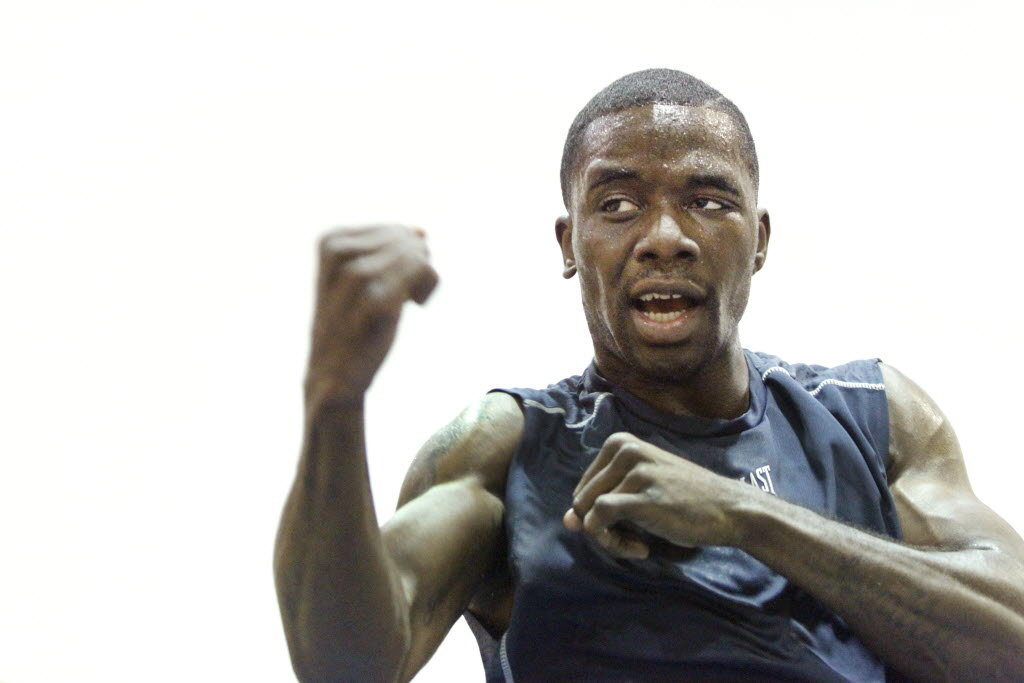 SUMMERTIME at Martin Luther King Jr. Recreation Center in East Cleveland is a constant stream of activity. There are kids, dozens of kids, endlessly streaming in and out of the gymnasium. Perpetually running, pounding basketballs off the worn hardwood floor, or sitting in the corner bleachers talking as sweat trickles down foreheads.

And always, amid the thick, steamy air, the world-class athletes train in one small corner of the gym. A national boxing champion has emerged from MLK Rec Center and trainer Renard Safo in each of the past four years.

They nimbly jump rope. They pound heavy bags without fatigue. They spar in the tattered, roped-off ring.

Every day, they are the constant at MLK, particularly the group of five young boxers who call themselves the Fab Five. They are all from Cleveland, have all found success at national and professional levels, and are always there to push each other. Safo oversees it all, always sporting the blue U.S. Postal Service uniform he wears in his day job as a letter carrier.

But in summer 2010, the Fab Five turned into the Fab Four. No one knew where to find Terrell Gausha.

The reigning 165-pound national champion who already was a favorite for the 2012 Olympics was supposed to be getting ready for his national title defense, but his gym appearances had suddenly become sporadic and then nonexistent. When anyone asked where Gausha was, the Fab Four shrugged shoulders.

Safo, though, scowled and rolled his eyes.

"I know where you can find him," he said.

Down on Woodside Avenue, around East 130th Street. In a part of Cleveland where strangers earn suspicious stares.

One day two years ago, Gausha lounged with a handful of friends on the front porch of a tired house. When an unfamiliar car approached, his friends scattered. Gausha reluctantly stayed to explain why he was there and not training at MLK.

His features were doughy, his weight well above the 165 he must weigh when he fights. But he had just signed a contract with a new organization, the World Series of Boxing. It would allow him to retain his amateur status while still getting paid to fight with teams scattered across the United States that challenged those around the world. He still had his sights on the Olympics, he said.

"I want to win a gold medal," he explained.

But for the next year, no one believed him.

Gausha went to his WSB team in Memphis, Tenn., he trained and fought with them, but otherwise, he fell off the national boxing map. His weight ballooned to 208 pounds. He didn't even try to fight in the 2011 national championship.

When he came back to Cleveland to visit friends and family, to see his young daughter, Ty'era, more often he found his way back to Woodside Avenue instead of to MLK. His thoughts kept drifting back to a loss in the 2010 Golden Gloves Tournament of Champions, a difficult 3-2 decision that left him deflated. And in early 2011, he wasn't so sure about the Olympics at all.

Gausha had trouble focusing and couldn't keep his weight down. He considered getting a job and giving up boxing, but something wouldn't let him quit.

His mind kept wandering back to something he remembered one of his boxing idols, Sugar Ray Leonard, saying: Of all the accolades he had earned in his career -- world titles, fame, glittering belts -- the most treasured was his 1976 Olympic gold medal. Gausha still wanted a chance to earn his own.

Then, in October 2011, something happened -- an opening. He saw the reigning U.S. middleweight champ, Jesse Hart, falter in the preliminary round of the World Championships. USA Boxing opened up that 165-pound Olympic slot for general competition. Gausha talked to Safo about what might happen. He would have to prove himself, win at least the 2012 national title and prove that he had potential to make waves in the Olympics.

"You have one more chance," Safo told him. "You can do this. You have to do this."

In late 2011, he went to his new WSB team in Los Angeles, and for the first time, he said, really learned how to train and how to diet. He followed Safo's advice about eating only chicken and fish and running twice a day. He followed his teammates' advice about how to work and keep sight of his goals. He learned that what he had once thought was training hard wasn't so hard at all.

He dropped 40 pounds. Keeping the weight off became easy when he learned proper nutrition from his teammates and WSB coaches. He entered the 2012 national championship in Colorado Springs, Colo., in March 2012 with his sights set on toppling Hart.

And entering as an unseeded boxer, after winning six bouts in seven days, the 24-year-old edged Hart, 3-2, in a double-tiebreaker, the slimmest of margins that left Hart fuming and threatening to quit boxing.

Gausha still had to advance to at least the quarterfinals of the Americas Qualifier in Brazil in May, but the momentum clearly had swung in his favor.

When he arrived in Rio de Janeiro, Gausha was so confident, so dominant that he breezed through his opening fight with a 22-5 pounding of Nicaragua's Oliver Ballestero. One more victory against Puerto Rico's Enrique Collazo would guarantee an Olympic spot for Gausha. Safo talked to his boxer before the match, reminding him to be aggressive early and start quickly.

Gausha not only triumphed over Collazo, he also left no doubt in the 16-5 victory.

"All the pressure I endured and hard work that I put in has paid off, and God is great," Gausha said after the win. "Dreams really do come true. I grew a lot over the last year, and I saw what it took to get to this point, so the timing was right for me."

Even with his spot in London secure, Gausha continued to win in Brazil. With two more victories, he won the whole tournament, coming home with the gold medal.

Trainers and boxing experts have seen Gausha's strength of always knowing how to adjust to his opponent be supplemented by a surprising conditioning.

"He was always a talented boxer, probably one of the most fundamentally sound boxers we have in this country," said Basheer Abdullah, the nominee for USA Boxing's head coach in the Olympics. "And he's a very intelligent boxer, he'll adjust to his opponent's style. His boxing IQ his very high. . . . He had a tendency to fatigue a little bit in the later rounds. What I'm noticing now is he's stronger as he goes. He's always picking up the tempo."

Whenever Gausha is back in Cleveland now, whenever he goes back to MLK to work with his fellow Fab Five members, they notice a difference, too.

"He thinks more," said Prenice Brewer, a lean welterweight in the Fab Five who sparred recently with Gausha. "I wouldn't want to go more than three rounds against that [expletive]."

Although Safo can't accompany his young pupil to the Olympics because Gausha will be working with USA Boxing coaches, Gausha said he talks to his trainer before every fight and follows his advice during each round.

"I can actually hear him in my ear," Gausha said.

Safo was one of a handful of confidants who didn't give up on Gausha. He just was waiting for Gausha to find his focus and come back to MLK.

"I felt like God gave me another chance, and He wanted me to take full advantage of it," Gausha said. "Some people probably did give up on me, and that makes it that much greater now."