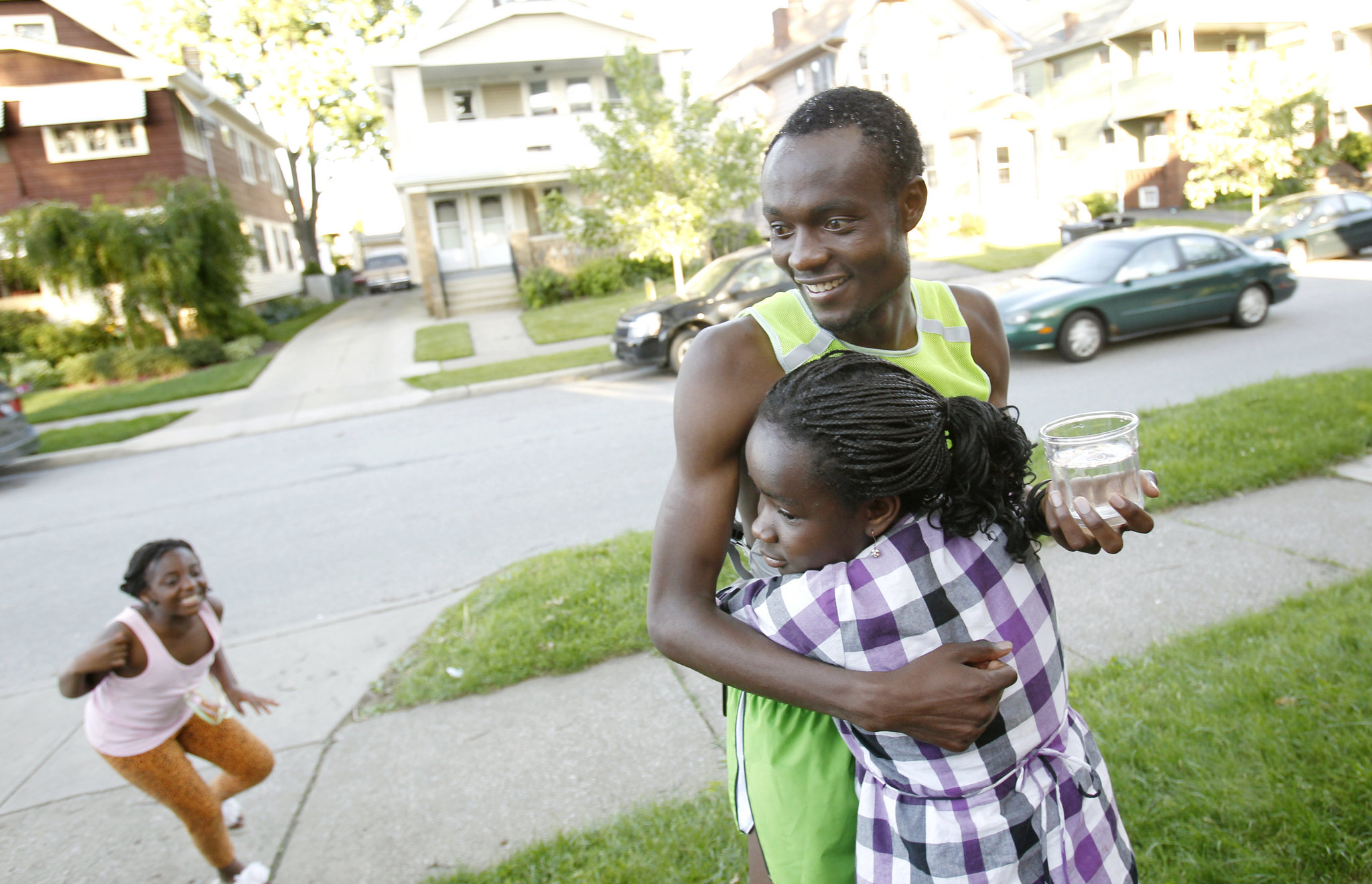 LAKEWOOD, Ohio -- Of course, Makrobondo "Dee" Salukombo had a plan. It would be foolish to attempt to run 120 miles from Granville to Lakewood without a plan.

It's just that the Denison University distance runner's plan was simply to start running after he finished competing in the NCAA Division III Track & Field Championships, and stop when he reached his family home in Lakewood. That's about it.

No water. No food. No idea where he'd sleep. Not a single penny or even a cell phone. Only a smile and the compelling story of how he wants to raise money for the children in the school in Kriotshe, the village in the Republic of Congo where he lived until he was 12.

On Wednesday evening, Salukombo jogged easily down his Lakewood street with a broad grin stretched across his face, his fluorescent yellow bib flapping against his lithe body in the cool breeze. He strode to the door of his house, where a hug from his mother, Aimee, awaited him.

He took a small swig of water. He did not pant for breath.

"I think I could do another 40 miles tomorrow," he declared with a smile. "I'm feeling good."

He won't have to. Wednesday's 37.5 miles was the final leg of a three-day journey he began Monday in Granville. He relied on the kindness of strangers to give him water,

In the longer tale, it was the continuation of the voyage Salukombo began with his family 10 years ago, when his parents and six siblings fled the war-ravaged Congo, endured three years as refugees in Uganda, and finally arrived in Lakewood to begin anew.

In that first part of his story, Salukombo survived fears that his father, Fanchon, had been killed when he was imprisoned for three days during an uprising in the Second Congo War. His family lasted a year in Congo as Fanchon escaped first to Uganda until the remainder of the Salukombos could join him. Then, after three years as refugees there, the family was allowed to move to United States, where they settled in Lakewood in 2005.

Dee Salukombo was a standout soccer player and cross country runner at Lakewood High School, before deciding to attend Denison in 2007 to run track and study chemistry. Each time he drove home during his first two years at college, he wondered aloud if he could run that distance.

Finally, in his junior year, he began to plot his path. He would make the trip after the NCAA Championships, at the conclusion of the school year. He would take nothing with him but his faith that God would provide.

"I was scared," his mother, Aimee, said Wednesday. "Three days with no money, no phone? I couldn't sleep at night. But God is good."

For three days, Salukombo ran 10-15 minutes at a time, typically under an eight-minute mile pace. At every pause, he stopped to ask a stranger for water, feeling fortunate that he passed many people mowing their lawns who were happy to oblige.

On Monday, Salukombo survived 45 miles of running but also the 90-degree heat that made him question his quest among the hills of middle Ohio.

"I knew about the hills," Salukombo said, "but I wasn't expecting the heat."

When he ended Monday in Loudonville, he stopped to ask three people for lodging, and finally was forced to approach a policeman for help. Even after that, he walked for an hour after his long day of running until an elderly man agreed to house him for the night. When he finally sat down, he took one bite of a sandwich someone bought him, and threw up.

Tuesday, he subsisted on a bowl of cereal until he stopped near Wadsworth, where he stayed with a friend of Torrens' wife who had been forewarned to be on the lookout for him.

Torrens, who considers Salukombo to be as close as a son, said he never considered interfering further with his runner's goal. Not only did Salukombo run the entire 120 miles, but he raised about $4,500 to donate to the school in the Congo where he once had to share a single book with all his classmates.

"He was determined this was something he was going to do," Torrens said. "He and his whole family are very religious because of what they've been through in their earlier life. They believe that the Lord will take care of you. He believed no matter where he stopped for a drink of water, a meal, someplace to sleep or take a shower, he would find someone to help."

Wednesday, as the heat broke and Salukombo ran closer a to 7-minute pace, he couldn't help but smile. Though every part of his body hurt at one point during the three-day run, he said he felt good when he finally stopped. He lost 12 pounds along his journey. He gained several new Facebook friends and met many kind strangers.

He finished, as it turns out, on National Running Day.

"It's a good day to finish," he said with a laugh. "Now, I'm planning on going to bed for three straight days."