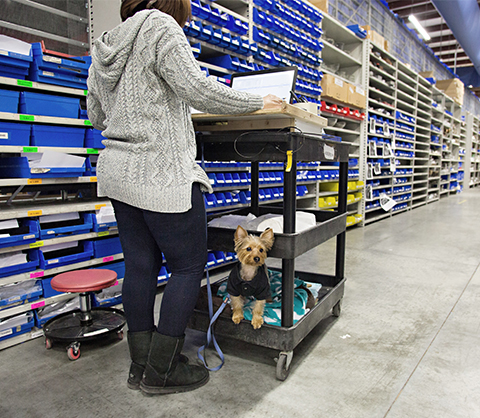 Could your office go pet-friendly?

When Kim Headen first began bringing Charlie to work, he behaved like any good Yorkshire terrier allowed to visit an office filled with china and crystal should. He sat happily under Headen’s desk in the warehouse at Replacements, Ltd., the Greensboro, North Carolina, company that is the world’s largest retailer of contemporary and antique china, crystal and silverware.

He would greet anyone who walked by with a sniff and an offer of his head for some pats. He plopped down in the aisle alongside Headen’s desk with such authority that co-workers deemed it “Charlie’s Boulevard.”

But whenever Headen had to venture off to search the stacks for an obscure piece—which happened often for her job of problem orders specialist—Charlie would panic. He wanted to follow her so desperately that he would whine and bark until she returned. Not only was this a problem for those around Headen, but it added stress to her day.

It didn’t take long for Headen and Charlie to find a workable solution. Now, Charlie rides comfortably on the bottom shelf of a rolling cart that Headen pushes up and down the aisles of china in the 500,000-square-foot facility. He has a padded bed in the cart where he can lounge, safely on his leash. He peeks his head out occasionally to check out his surroundings, but mostly is content to, as Headen says, “just ride.”

It’s a comfort for Charlie to be with his person, and it’s a luxury for Headen to be able to bring her pet to work. He joins her two or three times a week, typically when she has errands to run after work and knows Charlie would be left alone at home too long. Sometimes, she brings him just because she thinks they both would enjoy the company.

Replacements has had a pets in the workplace program for more than 20 years. It started when CEO Bob Page brought his own dachshunds into the office, enjoyed it and realized employees might like to bring their dogs to work, too. The company also encourages customers to bring in pets as they browse the showroom.

Not only has the employee program flourished—20-30 dogs come into the office daily—but it has yielded numerous positive effects. It’s a low-cost benefit the company can offer to employees, and it helps improve job satisfaction and job performance. Dogs in the workplace, a study has found, also reduce stress among employees and increase connectivity between co-workers.

Plus, who wouldn’t want to see a dog riding along in a cart at work?

About four years ago, Virginia Commonwealth University business professor Randolph T. Barker was looking for studies about the effects dogs in the workplace have on employees and made a remarkable discovery: He couldn’t find anything. Well, nothing reflecting research done in actual work environments. Everything he saw had been conducted in a classroom or sterile laboratory.

Barker and his wife, Sandra, are longtime dog lovers. Sandra also happens to be a professor of psychiatry at VCU, and together, the two decided to collaborate on a project that would measure stress levels of people in offices where dogs are allowed. They spent a week at Replacements’ facility.

What they found confirmed their theory: Dogs in the workplace, in general, make people happier. And less stressed. And more productive.

The most unexpected result came from observing how pets in the workplace helped employees interact, Barker says.

“It’s a really positive impact on morale and communication and cooperation,” Barker says. “People without dogs would go by and see people with dogs and ask if they could take them for walks. And we also noticed people were much more connective. We call the dogs the ‘communicative energizer.’ ”

At Replacements, marketing coordinator Amy Fisher and her West Highland terrier mix Callie sit directly across from multi-channel marketing director Julie Robbins and her tiny Chihuahua mix, Buster. For the most part, the two dogs are kept apart by baby gates cordoning off the entrance to each employee’s cubicle.

But occasionally, Callie and Buster peer over their gates and want to interact. And when they do, Fisher and Robbins can’t help but talk, too.

Even more often, co-workers from across the building simply stop by to visit with Callie or Buster. Fisher admits she has frequent work breaks where she talks to co-workers—whether she wants to or not. And Robbins keeps a sign in her cubicle reminding anyone who is visiting Buster or her other dog, Hiro, about their personalities:

Buster: I love affection. I am a finicky eater. I am shy of most other dogs.

Hiro: I love affection, but I can be shy when the gate is closed. I love treats, but I have a sensitive tummy.

“And of course, I talk to [the dogs] all the time, too,” Robbins says. “I’ll tell them where I’m going. I make deals with them all the time and say we’ll go for a walk if I finish something. It’s a great excuse to get up and get exercise.”

Marcus Thomas is a Cleveland, Ohio, advertising agency that is easy to identify as a dog-friendly office: Its logo is the silhouette of a black pointer, one paw raised and body poised to indicate that he had found what he sought. Managing partner Jim Nash says the logo is intended to signify how a “faithful companion is pointing the right direction,” just as Marcus Thomas counsels clients on what to do with communications and positioning products.

The company happened to stumble into a dogs in the workplace program at the same time the logo was being developed, so it all works together well.

Just as with Replacements, the program developed almost by accident. Creative director Joanne Kim began bringing her Jack Russell terrier into the office because her 70-mile commute took more than an hour. Long hours in the office meant too much time away from her pup, and not enough opportunities for her dog to go outside.

Quickly, other employees began to ask if they could bring in their dogs, too, and a dogs in the workplace program began.

When Marcus Thomas moved to new offices recently, it made sure that the space was dog-friendly: the floor is either tiled or has easy-to-remove carpet squares in case of accidents, and a large, fenced-in park-like setting in back is perfect for dogs to relieve themselves.

Every day, Nash estimates, six to 10 dogs are in the 125-person office with their owners. “It’s just part of our culture,” Nash says. “The nice thing about having them around is it’s a typical agency: fast-paced, a lot of quick turnaround things, high-pressure campaigns. So the stress levels can go up. And the next thing you know, you’re sitting there working and a dog is there, too. They just have a tendency to bring things back to earth with a little bit of reality.”

Besides, as Barker noted in his study, bringing your dog to work generally is an attractive benefit to potential employees.

It continually ranks as employees’ favorite benefit at Replacements, and the company uses it as an enticement when posting job openings. Powerhouse companies such as Google and Amazon have famously allowed dogs in their offices for years.

“Having pets in the workplace can be perceived as low-cost,” Barker says. “It’s a wellness benefit that lots of organizations may want to think about when they look at attracting employees.”

At The HSUS, the dogs in the workplace program has been in place since 2006. It did not happen by accident. It was researched, planned and well-thought out. And people love it.

“Employee surveys have told us this is one of the most popular benefits of working here,” says Erich Yahner, archives and research services manager at HSUS and a member of the organization’s Pets in the Workplace committee. About 100 dogs are registered for the program at the HSUS offices in Washington, D.C., and Gaithersburg, Maryland. Yahner’s springer spaniel mix, Harriet, is a regular. Even president and CEO Wayne Pacelle regularly brings his beagle mix, Lily, into work.

Aside from all the expected benefits of the program, such as lowered stress and increased connectivity, The HSUS has found that the program also encourages pet adoption. People who work long hours often hesitate to get a pet, but when they can bring their dogs with them, it knocks down that barrier and can help more animals find homes.

For instance, Kate Schrader, manager of administrative services, never would have adopted her Brussels Griffon mix, Miles, if The HSUS didn’t have its PIW program.

Schrader commutes about 80 minutes each way to work and is away from home 12-13 hours a day. She knows that’s too long for a dog to be left alone, but particularly for a Brussels Griffon, a breed known for separation anxiety. The adoption group she worked with, in fact, would only place dogs with owners who worked from home or worked part-time because of the trait.

Fortunately, The HSUS had its program in place when Schrader was ready to adopt, and she began bringing Miles to work immediately. There was a period of adjustment: At first, Miles would come home from the office exhausted, because he spent more time greeting people and exploring than napping, as he typically did at home.

And it took about a month for Miles to become fully comfortable whenever Schrader had to leave her cubicle. Miles’ separation anxiety surfaced quickly, and her caring coworkers often came rushing over to comfort the little pup. “I had to say ‘Please don’t. He needs to get used to being by himself,’ ” Schrader says. “But he loves company, he just loves attention.”

Now, Miles is one of the most popular dogs at the Gaithersburg office, and he has frequent visitors.

“The people who don’t have dogs, for whatever reason, they love being able to come over and pet him and hold him a little while,” Schrader says. “They get their ‘dog fix,’ as they call it, which is beneficial to everybody. If I have a bad day, I just pick him up and relax for a little bit. It’s kind of like doing a yoga class. It’s very relaxing.”

At Replacements, Charlie’s owner, Headen, has seen how her coworkers are drawn to her dog; she often has visitors waiting at her desk when she returns from rounds of pushing Charlie in his cart.

“I’m an afterthought,” Headen jokes. “It’s always, ‘Hi Charlie!’ and then, ‘Oh, hey, Kim.’” Oftentimes, her coworkers are just hoping to catch a glimpse of him riding through aisles of delicate china to brighten their day.

All the other benefits—increased connection, lowered stress, less separation anxiety for the dogs and the chance for hard-working people to be able to adopt and enjoy the companionship of a pet—are wonderful side effects, too.