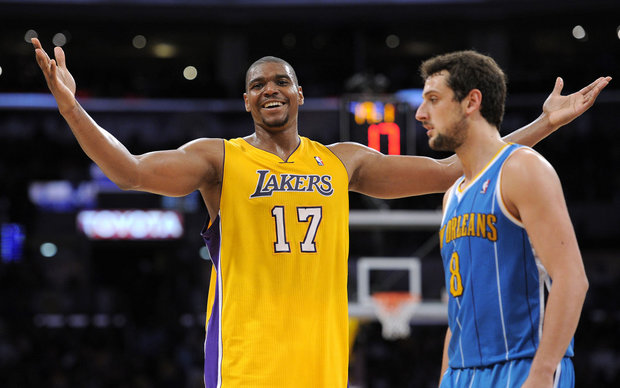 Complicated, talented Andrew Bynum won't be defined by others' expectations

CLEVELAND, Ohio – Say the name "Andrew Bynum" in Philadelphia, and you'll probably receive a scowl, an earful of angry words, and

Like this one, from Sixers CEO Scott O'Neil on a Philadelphia radio station in July: "I apologize on behalf of the Sixers to any fan who invested and thought Bynum was going to be their guy and be the savior."

Talk about Bynum in Los Angeles, and you're likely to hear about the time the 7-foot center clashed with then- and

Or the time former Lakers teammate Kobe Bryant publicly blasted the young center and moaned he should have been traded eons ago. "F------ ship his (butt) out," Bryant told a couple fans with a video camera in 2007.

Mention Bynum in NBA circles around the league and you're certain to hear about if he can stay healthy. You might hear about the growing volumes of his knucklehead moves – injuring his knee while bowling, for starters – and his ability to confound and frustrate those who try to harness his ability.

There is one positive in all this.

Which, of course, is probably for the best. Defined by others, Bynum would be a head-case and a slacker, someone who wasted away the entire 2012-13 season with the Sixers, a player who didn't take care of his knees and who didn't try hard enough to get healthy after he was traded to Philadelphia as the main compensation in a deal that sent Dwight Howard to L.A.

Defined by those who know him, Bynum is a complicated big man, one who works hard, has powerful-yet-nimble limbs and an ever-churning brain that yearns to take apart and rebuild anything complex, and needs to be challenged constantly.

And in the words of Cavaliers coach Brown, the 25-year-old Bynum has one redeeming quality above all else, one enormous reason the Cavaliers were willing to take a chance on him by luring him to Cleveland with a potential two-year, $24 million contract.

"He could very easily be the best center in the game," Brown said. "Not only in the game today, but he's skilled enough and has the rest of the tools to go along with it to be one of the best ever."

Then why is he so misunderstood? And why is it going to work in Cleveland? Why should we believe Bynum will be healthy and focused this time?

Frankly, Bynum doesn't care. He has nothing to prove to you or anyone else.

Therein lies the problem. Bynum hasn't played in an NBA game since May 12, 2012. What began as sore knees that have perpetually plagued him since his arrival in the NBA in 2005 turned into a deeper issue in 2012.

A procedure performed in Germany in the off-season didn't solve arthritis problems. According to Bynum, doctors advised him to wait to see if his knees would improve and he could avoid surgery. In the interim, a trip to the bowling alley caused more problems with his knees – and lost him more fans in Philadelphia.

When he finally had surgery in March, he had lost the entire season. When video of him flamenco dancing in Spain surfaced in May, Sixers fans were outraged.

"I don't really have an explanation," Bynum said. "It's just what happened, my knees just weren't healthy. For whatever reason, it took a very long time for me to get back on my feet. That's really it. Cartilage was just breaking and nobody knew why."

Bynum's main obstacle now is arthritis in both knees. He strengthens the muscles around his legs in grueling, daily workouts, and he limits the pounding as much as he can with training that involves activities like running on an underwater treadmill.

Still, according to a 2011 Sports Illustrated article, since he was a child, Bynum's doctors have been concerned with his pelvis, leg and foot. "Andrew is challenged in terms of his skeleton," Lakers head athletic trainer Gary Vitti told Sports Illustrated. "But we can work with those issues to some degree. What you can't do is take someone with a normal Q angle and make him 7 feet, 285 pounds."

And that's why the Cavaliers are willing to take a chance on a player who once was suspended and fined for a brutal forearm to the chest of airborne Dallas Mavericks guard J.J. Barea during the 2011 playoffs.

Cranky knees, clashes with coaches and teammates, dirty plays – all of it is worth it for a 7-footer who averaged 18.7 points and 11.8 rebounds in 2011-12 -- his last full season with the Lakers.

"To be around a guy who has the personality he has, who wants to be great, that's young and agile and athletic for a guy his size, as big as he is, then on top of that, as skilled as he is, I don't know who wouldn't want to take a chance on a guy like that," Brown said. "Especially at his age. So for me, it was an easy decision."

Brown and those around Bynum have seen the other side of the 7-footer, too – the inquisitive, intellectual side that wanted to be an engineer and loves to take apart and build his own computers.

"I never learned how to program them, which stinks," Bynum said. "But that's what happens when you choose to go to the league instead of college."

Bynum's thirst for knowledge is apparent in all that he does, from his voracious appetite for books to his love of travel to experiencing different cultures to his questioning of authority and the status quo.

"We always thought he was going to be a lawyer," his mother, McCoy, said. "He always had the answers and why should it be like that and stuff like that. Of course he's going to speak his mind and his opinion."

Bynum says both his basketball skills and knowledge were challenged and nurtured after he was drafted by the Lakers at age 17, and that is what helped him to flourish and develop quickly from a high school player who had little acclaim coming out of Plainsboro, N.J.

"My first three coaches and role models were Kobe, Phil Jackson and Kareem (Abdul-Jabbar)," Bynum said. "I was really lucky in that I got to see what true work ethic was, I got to be coached by Phil, and with Kareem, work on footwork and talk about the game."

Now, after years of expectations and injuries, those same role models have little relationship with Bynum. When a request was made to Abdul-Jabbar's manager for an interview, he merely issued a two-sentence response: "If Bynum's knees are healthy and he is in shape he can have a great season. I'm sure he's motivated to show everyone that he is a dedicated professional."

No matter. Think what you want about him, say what you will, Bynum will continue to live to own his expectations with a shrug of his shoulders -- just like he's always done.

"I don't really care. I don't read articles," Bynum said. "I know a lot of people around me do, obviously my family does and they get sensitive. But all you have to do is play the game and all that stuff goes away."