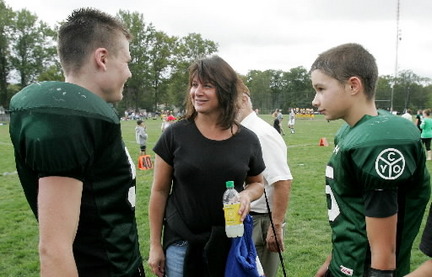 Football games in Cleveland's Catholic Youth Organization are not small-time affairs, especially when it comes to St. Thomas More. The longtime CYO powerhouse does everything big -- from the 169 plays in its playbook to the two teams it fields for seventh and eighth grades, instead of the combined one that most Catholic grade schools in the CYO favor.

So there is a grand ritual to how every Sunday contest unfolds. Every week before their game, players attend the 10 a.m. Mass in the round, cinderblock church. Clad in forest-green jerseys atop white, collared shirts tucked into khaki pants, they are blessed by the priest at the end of the service.

"Bless this team today," Rev. William Bouhall says, his right hand raised and outstretched as he stands at the altar. "Help them to win and stay healthy."

The games themselves are miniature versions of high school contests, complete with $2 admission fees. All but a handful of STM's games are even held on high school fields.

Every game, parents of the players cram the sidelines of the field. Fathers and mothers mingle, trading stories about their children, updates on their lives -- all while keeping a close eye on the action. As the ball moves, packs of parents follow along on the sideline. No one sits in one place for too long.

And at one end zone of the field, at every game, a cluster of high school coaches stands in the corner. Assistant coaches from area Catholic high schools, for the most part, they stand and they watch. According to OHSAA rules, they are not allowed to talk to any of the athletes; that would be construed as recruiting.

However, they wear school colors and school T-shirts and school jackets with the school's name proudly blaring from their chests. They talk to each other about their own games the night before, their own players who are playing well and those who are struggling.

And they keep an eye out for standout eighth-graders. For Catholic high schools, the CYO is their feeder system. And St. Thomas More, in particular, has produced some of the top football players in the area. Many of the starters from St. Ignatius' run of nine state titles and three national championships in 14 years played there -- quarterback Joe Pickens, defensive back/receiver Mark Ruddy, center Casey Baker and guard Jim Pelligrino. Current Ohio State safety Nate Oliver, who played at St. Edward, is also an STM product.

They're reminders that the high schools are interested in having players from St. Thomas More on their teams. Every high school coach in the area would like a player from STM on his team.

"I'd be happy if every kid with a white helmet came to our school," Shuman says, gesturing toward the STM players.

Players groomed in the system are well-versed in the basics of football. They know how to get in a three-point stance, they know that teamwork and synchronization can top pure athletic talent, and they know that practice starts promptly at 6 p.m. so they'd better be dressed in full pads and ready to start when the whistle blows.

The STM players don't need much persuasion to look at area Catholic high schools, though. That's part of what they're groomed for, too.

Ian Stuart, STM's dominant lineman, has had Padua on his list of potential high schools from the start. His older sister Margo is a junior there, so finding transportation wouldn't be difficult. He particularly likes that Padua has girls -- a benefit helping to balance out the fact that the high school has a less prominent football history than all-boys schools such as St. Ignatius or St. Edward.

Somehow, despite never showing an interest in or contacting the school, mail has begun arriving from St. Edward at the Stuart household. There have been letters and DVDs touting the school as the place he should attend. Ian isn't so sure how he'd find transportation to the Lakewood high school from his Brooklyn home, though. And he's not sure how he'd fare academically there, either. Although his grades have improved to mostly As and Bs with an occasional C since he began attending St. Thomas More two years ago, his mom, Valerie, worries about the new rigid structure of a Catholic school being too overwhelming for her son at times -- even though she's also grateful for the discipline it's instilling in Ian.

And there's another worry. Valerie isn't sure how she's going to afford both Margo's tuition at Padua and Ian's tuition at whichever high school he ends up selecting.

This fall, her four-year-old marriage crumbled, and she and the kids moved into an apartment down the street from STM.

Valerie already works two jobs -- for the Cuyahoga County Board of Mental Retardation and Developmental Disabilities, and as a parking enforcement officer on the weekends. Her city job requires her to live in Cleveland, and she won't let Ian go to city public schools. She'll find a way to send him to a private, Catholic high school even if she has to work three or four jobs to fund it. She's not entirely sure how she'll make it all work, though.

"It's kind of a shaky situation," Valerie says quietly. "I haven't thought about that."

Through all the personal turmoil, Ian has remained the same on the football field. He's still the same bright, smiling face winning every sprint drill at practice each day. He's still fierce in games, especially on defense when he thrives in attacking the ball. Still he encourages teammates with his perpetually upbeat attitude.

In the classroom, it's not so easy. Ian was acting up during classes recently, talking back and not paying attention. One of his teachers called home, and Valerie explained why her 14-year-old son was going through a difficult time. But on the field? The game is where Ian has his emotional release.

"I love to hit," Ian says, grinning toothily. "It just gets the energy off. It feels good."

None of the coaches would have even known about his mother's divorce if Ian hadn't lived next door to STM athletic director Rob Previts . . . and Previts saw Valerie and her children moving out one weekend.

With Ian steadying the lines and Ryan Fallon leading as the calm and savvy quarterback, St. Thomas More has cruised through its first three games, outscoring opponents 67 to 20.

But the real test comes in the fourth game. Sts. Joseph and John is the toughest competition in the league, the other undefeated squad with the best shot at derailing St. Thomas More's plans to repeat as city champion.

The football field at Padua where the teams play on the chilly, autumn Sunday afternoon is lined with parents and coaches from area high schools -- St. Edward, Padua, Trinity, Holy Name. And the game becomes everything they'd hoped to see -- an even contest between well-matched teams. Quickly, the score is knotted 8-8.

Ian, as always, dominates on defense. He squashes one end-around and bounces up immediately, pumping his fists. After a long run by standout running back Danny Lynch, Ian is the first at his side to congratulate him. Ian is the ultimate team player and leader who never seems to tire.

And Ryan Fallon directs the offense with his steadying leadership. Ryan wears a wristband on his left arm to remind him of some of the team's key plays, but in truth, he doesn't need it. Most of the time, before Slama has a chance to call a play, Ryan already is suggesting it.

After Lynch chugs the ball down the field with one long run after another, and Ryan keeps Sts. J-J off-balance with his occasional throws, the Wolverines find themselves 2 yards from the goal line on fourth down.

When the ball is hiked, Ryan holds onto it tight, puts his head down ... and barrels through the line for a touchdown. The 14-8 edge from his score is how the game ends.

With STM at 4-0 and headed toward what seems like another city championship, everyone is in good spirits, teasing and celebrating.

That is, until days later -- when the entire season unravels.

It's a Tuesday practice just like any other when Ryan takes his position at defensive back. He's so technically sound that Slama calls him one of the best to ever play the position at STM. Ryan's footwork is precise, his angles are accurate, and he has the speed to match most receivers in the league.

He is doing everything right again defending a teammate on a deep passing drill. Ryan keeps pace with the receiver, leaps into the air to try for an interception . . . and his right hand comes crashing down on the receiver's helmet.

"Aaarrgh!" Ryan shouts as he lands. Immediately, he knows something is wrong.

The next day, the doctor confirms his fears: he's fractured his right hand, very close to the growth plate. He needs a cast. He's out for the remainder of the season.

The playoffs are coming up, the chance to repeat as CYO city champs is within reach -- and Ryan is going to miss it all.